Now if only we could get this level of detail in every other Pokemon's page. - unsigned comment from Kage (talk • contribs)

Really. Where are the citations? This level of detail leaves many doubts in my mind. There are no sources referenced, and many of the "facts" under Physiology are questionable.

"The victor of the battle is allowed breeding rights with any others within its hoard. The defeated, if it cannot escape, is devoured by the hoard."
Typhlosions are cannibalistic? This seems highly unlikely in a series where death is rarely mentioned, let alone cannibalism.

"They primarily feed on breeds of Pokémon with large amounts of flesh, such as Makuhita or Sealeo"
Again, I'd like to see some references. Sealeo live in cold regions, according to the Sealeo article, which references the movie Destiny Deoxys. Typhlosions, being fire types, definitely don't strike as the kind to live in these cold regions.

"Many speculate on how a Typhlosion produces the fire it uses in offensive maneuvers; however, this author's theory suggests that several dry glands within its body are filled with oxygen and nutrient reserves."
A theory should not be on a page regarding facts. The more and more I read into this, the more it seems as if it's being made up to the whims of an author.

Is there any particular reason that Typhlosion's Crystal shiny sprite is facing the opposite way to its normal sprite? - unsigned comment from Gastly's mama (talk • contribs)

a bit off topic, but the hg/ss sprites seem a bit distorted; the shiny one is a little too large, the normal one slightly small. they also seem slightly blurred, however this may be my eyedight as i am due an eye test XD--Ben7229 16:36, 8 November 2009 (UTC)

I'm guessing you didn't see them move either? They were animated with massive amounts of "whitespace" that was killing all templates the sprites were used in. The static versions have been reverted because that was simply too much gap. —darklordtrom 09:14, 9 November 2009 (UTC)

But Typhlosion has been shown to be able to walk on two feet. Nevertheless, I don't know if it should be considered bipedal, seeing as the Pokédex doesn't consider it to be so (its body style is listed as four-legged). --AndyPKMN 16:56, 20 February 2010 (UTC)

While looking through some bits of greek myth today, I stumbled upon this little creature: http://www.greekmythology.com/Myths/Creatures/Typhoeus/typhoeus.html

In the Gen II Pokedex entries it says for Silver "It has a secret, devastating move..." or something like that, which links to Eruption, yet Eruption wasn't introduced until Gen. III. Now one there is no mention of that being odd in the trivia or anywhere else in the article to maybe explain why it was linked to that, and two that doesn't seem right... I mean, should it link to Eruption, even if it makes sense? Idk I just wanna see what people say. I won't change it for fear of possibly messing up a section or something... In A Manica 22:37, 24 December 2010 (UTC)

Before the possibility of someone saying it comes true and they think I'm blind, yes I know that the FRLG Pokedex entries are the same as GS. the link would work better there, though it would still be kinda weird considering...In A Manica 23:12, 24 December 2010 (UTC)

"Bom" Which means 'Tiger' in Chinese.

This is not the Chinese word for tiger in either the Mandarin or Cantonese dialects. Could this be removed? Mokoniki 20:14, 5 January 2011 (UTC)

I hope I'm doing this right?

Maybe I'm ignorant of Gen V, which I hope I'm not considering I beat the game, but I'm sure Fire-types are not weak to Dragon. Idk how to change stuff or I'd do it myself. ~~President of Zeta-Tech Inc.~~ 10:10, 10 January 2011 (UTC)Zetaphrem

I see there was a discussion on this about a year ago, but it doesn't seem to have been resolved. I didn't want to add to it because it's more than six months old, but I did want to bring up the subject. I noticed this page has a lot of references to Typhlosion being a natural biped, including a piece of trivia about it. However, the Pokédex classifies it as a quadruped. I wanted to do a little research on this, so I checked out some videos of the anime and 3D games. It looks to me like whenever Typhlosion wants to do some serious moving (running, for example) it moves on four legs. I even some a shot of Typhlosion eating on all fours, as opposed to sitting up the way most bipeds would. However, I only looked at a couple of videos, so I am by no means an expert. I know Typhlosion can stand on two legs and is usually drawn that way, but as Beartic's anime appearance shows, it could still be a quadruped. I thought that since both its "Behavior" and "Trivia" sections refer to it as naturally bipedal when it could just as easily be naturally quadrupedal, this was a worthy subject to bring up. I do deeply apologize if I am wrong about this. I'm only trying to help make our articles as accurate as possible. Thanks! Crystal Talian 10:32, 29 January 2012 (UTC)

Typhlosion shouldn't be classified as solely a bipedal, or quadrupedal. (except for the sake of body type) In many series' it shows Typhlosion running on all four, whereas in PMD it runs on its hind legs. (of course you could just argue that it's merely the walking animation sped up...) Pikachu is another example of this bipedal/quadrupedal movement. It typically runs on on all fours, but has been shown that it can run at high speeds on two legs. So I think the classification of it being bipedal, with the option of being quadrupedal, is based solely on the images of Typhlosion that exist currently, rather than actually watching its movements. So I say we go off the body-type and call it a quadruped that can be bipedal if it chooses to be. Slightly off the topic of order, I truly hope they someday make a sprite of Typhlosion that has it standing on all four of its legs. ★Jo the Marten★ ಠ_ಠ♥ 10:46, 29 January 2012 (UTC)

I agree completely. If it's all right, I'm going to do some minor editing to work the bipedal/quadrupedal by choice into the article, as opposed to simply naturally bipedal. Although I'd probably remove that trivia piece, as it would then be irrelevant. However, if we should wait for more opinions, I'm fine with that, too. For the record, I think a sprite of Typhlosion on all fours would look awesome. Crystal Talian 11:01, 29 January 2012 (UTC)

I believe Typhlsion's appearance was inspired by the Toon Patrol from the movie Who Framed Roger Rabbit.Robbie (talk) 00:48, 7 August 2015 (UTC)

Opinion. I personally don't see it. I doubt they'd create something based off a character, especially one not from Japan.--ForceFire 04:12, 7 August 2015 (UTC)

Then that means either they decided to remove the tail (for whatever reasons) or the Typhlpsion is not based of a weasel.--ForceFire 03:30, 8 August 2015 (UTC)

Why wouldn't they create something based of a character not from Japan? I see that in other pokemon. Digimon did it as well.Robbie (talk) 13:11, 8 August 2015 (UTC)

That's not at all similar. But here's an another idea: I saw someone mention that Typhlosion look like spectacled bear, and after googling that I can see what they meant. Even the fur colors match: 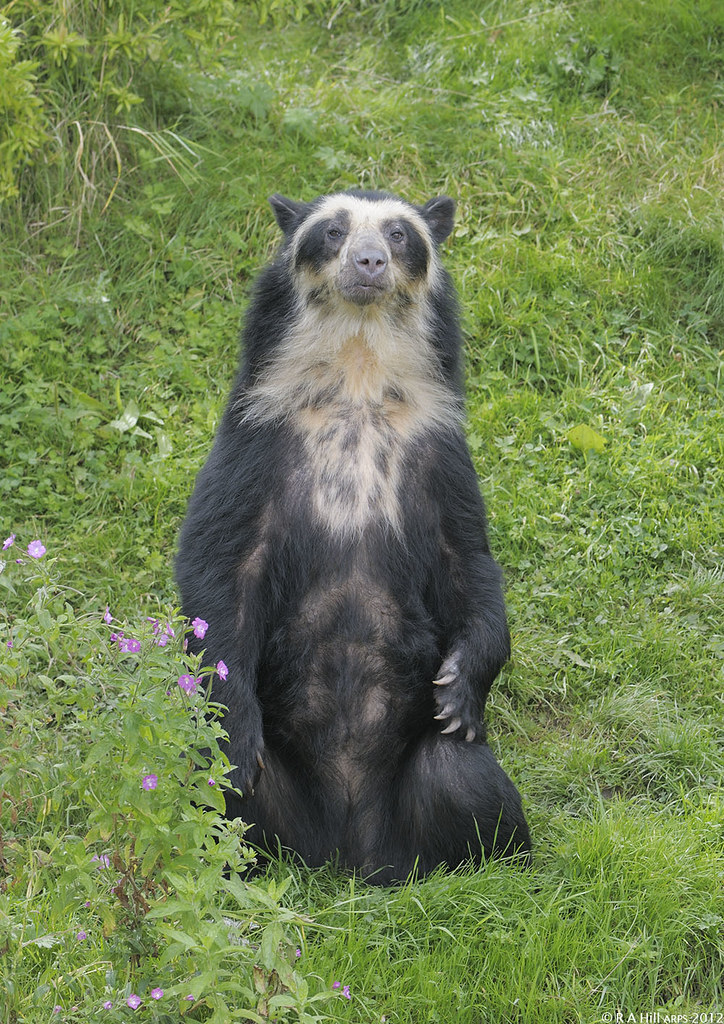 It should be rather notable that a fully evolved starter dosen't appear in ANY movie at all, specially after the trend that the regional starter trio's evolutions appear in their respective region's movies. So, I guess that the trivia is notable enough to be listed. ALL other starter evolutions have appeared in atleast one movie. - unsigned comment from PkmnTrainerV (talk • contribs)

Two reasons. First, it's just the movies. The starters are a relatively small group, as are the movies. Saying that this member of a small group is not in this other small group isn't really notable. Typhlosion has gotten screentime elsewhere and in a few specials as well. Second, it will become null as soon as Gen VII is released, as obviously none of those starters have been in a movie either. Crystal Talian 07:22, 16 September 2016 (UTC)

Regarding Typhlosion' screentime, I did mention in the previous topic that a Typhlosion is eligible for the trivia for the starter Pokemon with least anime appearances, (which is 3: Gonna Rule the School, Legend of Thunder, Poetry Commotion) which tied with Chestnaught (if movies are classed as 'appearances').

So I guess it should be noted that Typhlosion has got lesser appearances than the other starter Pokemon which is 3x6=18 Pokemon,- unsigned comment from PkmnTrainerV (talk • contribs)

Eighteen out of 700+ Pokemon. Really, the least isn't particularly notably in this case, unless that number happens to be zero appearances in the anime. Also, please remember to sign your talkpage comments with ~~~~. Thanks. Crystal Talian 07:53, 16 September 2016 (UTC)