The side game locations seem kinda odd. Could anybody fix it?

Thiss may be coincidence and I'm not sure if it's just me... Zapdos seems to resemble the hummingbird in the Nazca lines. Is this worthy trivia? EpicShadow 18:06, 10 September 2010 (UTC)

Just simply having a long beak isn't enough to make the connection.--ForceFire 02:39, 4 March 2016 (UTC)
Look at side views, Zapdos's upper beak looks very much like a nose. It also has menacing looking eyes which are how tengu are often depicted having.Robbie (talk) 16:07, 4 March 2016 (UTC) 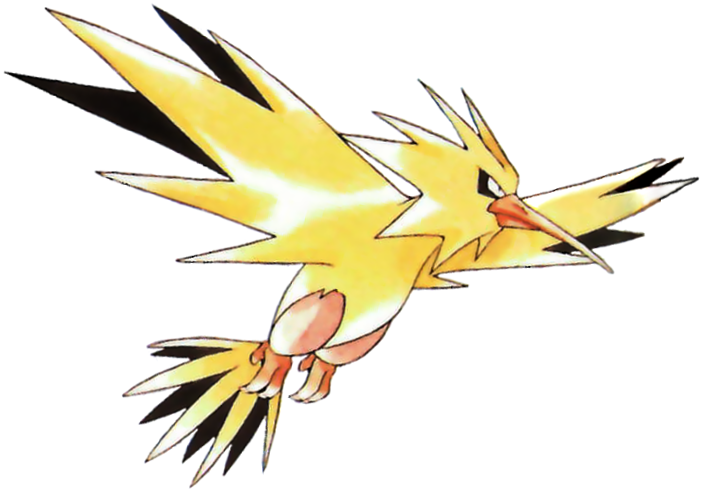 Tengu have avian characteristics and Shifty doesn't. That means there would have to have been a tengu bird pokemon from a previous generation.Robbie (talk) 19:07, 21 March 2016 (UTC)

How is this possible in Generation I? The edit history indicates that this is due to a transfer involving Stadium, but if it involves another game, that should be mentioned with how it would only require 2. Andy Snype (talk) 02:19, 17 August 2019 (UTC)

Yeah. I came here to ask this too. I am pretty confident that in RBY/FRLG you need three badges. As I understand it (unless you use cheats or glitches) in order to reach the Power Plant, to it is necessary to have obtained: - The Boulder Badge to advance beyond Pewter City. - The Cascade Badge to use Cut, which is necessary to advance to Route 9 before the Snorlax on Route 12 is removed. - The Soul Badge to use Surf.

If I am wrong, I am happy to be corrected on this. If obtaining Zapdos with two badges is possible but is contingent on using another game to achieve, then this should be clarified in the trivia; it would remain impossible to encounter Zapdos with two badges in a single-player run, which I think is an important distinction. --Jzime (talk) 07:57, 7 June 2020 (UTC)

I've never played Stadium so I can't confirm, but the trick appears to be that you can transfer in items -- specifically, a Fresh Water or other drink to give to the Saffron guard. That gives you access from Cerulean or Vermilion to Saffron, Celadon, and Lavender without needing Cut (and thus Route 9 via Rock Tunnel from Lavender) -- and access to Celadon and Lavender lets you get the Poké Flute so you can get the Soul Badge. Gauss (talk) 00:14, 23 June 2020 (UTC)

Under the Trivia section it says that Galarian Zapdos may be based on either a roadrunner or the Struthioniformes. I do not believe that this is the case. Galarian Zapdos appears to be based off of the secretary bird, a mostly terrestrial bird known for incapacitating its prey with its powerful legs. Noting its striking visual similarity to the Secretary Bird, and its category being the "Strong Legs Pokemon", I propose that this be noted in the Trivia Origins section. Here is the Wikipedia link for the Secretary Bird: [1]