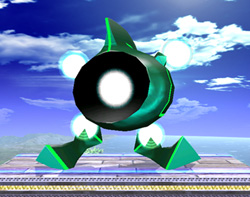 It's definitely related, they're both Rock types and even have the same pattern around their eyes. But I suppose it can't really be added to the article until we know which stage Dangoro is in the evolution chain (though my guess is that it's the basic stage, with a currently unknown Pokemon in between it and Gigaisu). T a r o m o n 16:56, 15 September 2010 (UTC)

heres how it works...if it's not confirmed it will not be added...even if its obvious and it turns out to be true then it will be added..Ataro 16:59, 15 September 2010 (UTC)
Serebii's calling it confirmed. Dangoro to Gantoru. Almost certainly Gantoru to Gigaiasu.

I'm unsure of the 'Dan' part, but I do know that 'goro' could be derived from 'goron goron', Japanese onomatopoeia for the sound of a boulder or a rock rolling down. ...And that's really all I can offer. Rai Marshall 21:49, 11 September 2010 (UTC)

Goron goron is not in the dictionary, but goro goro is.
As for the dan part, my best guess is 弾圧 dan'atsu, pressure, as its presumed final evolution is the High Pressure Pokémon. But I believe dan'atsu is the "oppression", "suppression" kind of pressure, not the one in physics etc, so I'm in the dark too... ㊰ブラッキーシュリー 01:23, 12 September 2010 (UTC)

What about dango, as in the round Japanese snack? That was what I thought of when I first saw this Pokémon. Phantom♫Junkie 02:19, 12 September 2010 (UTC)

Gorons from Zelda universe were already mentioned before, but take a look on Dangoro, giant Goron from Twilight Princess. I think the fact that they share one name should be mentioned.--ЫъГЬ 13:01, 15 September 2010 (UTC)

Funny I was just about to post this on this page. Unless Dangoro had the same Japanese name as the Pokemon here, I doubt it might be notable. Even then, we have no clue what the Pokemon Dangoro's english name is, as honestly, I think Gigaiath would better suit the idea of sharing a name with a Goron that large, but eh, wait for what someone else says or the english name reveal... Shiramu Kuromu 22:51, 10 November 2010 (UTC)