Why are we still using the artwork from CoroCoro. We have the Sugimori's DP artwork we should use it, I think. - unsigned comment from Maxim (talk • contribs)

Dark Wave - Unconfirmed and likely to be fake.

This new attack "Dark Wave" was reported on Blue SkY Blog, right. It first reported the names of new starters (it was real information). But it recently became infamous of posting FAKE informations. One of them first leader's name, Zack. He was revealed to be named Hyouta few days. And second is three fake Pokémon Names (Marsula, Garinan, Samusamu). There is no sign about these Pokémon and one of the infamous Fake Pokémon was named "Samu" (only two final characters of the name can be seen). So, the most recent informations on this blog are likely to be fake. And they're still unconfirmed. So, they should be removed from Bulbapedia until official announce of the attacks (It will prove if it's real or fake). The Blue SkY Blog is no longer a reliable source! - Maxim (Sorry for bad grammar, I am not native english speaker)

What's with the word "bunny" in its name in German? (And also Weavile looks more cat than weasel to me.)

I think it's absolutely strange that Sneasel and Weavile can't learn Sucker Punch when such a move is right up their alley. They're speedy, they're Dark, and they're capable of learning Ice Punch, Focus Punch, and so on. SharKing 20:50, 4 September 2008 (UTC)SharKing

While it is a move that makes sense for them, Sucker Punch is not literally a punch. (I'm sure some pokemon could punch to use it, but that's not that point.) Capsule Computer 10:32, 18 April 2009 (UTC)

Does anyone agree that Weavile's appearance may have been at least partially influenced by Egyptian clothing? I've provided images to compare: 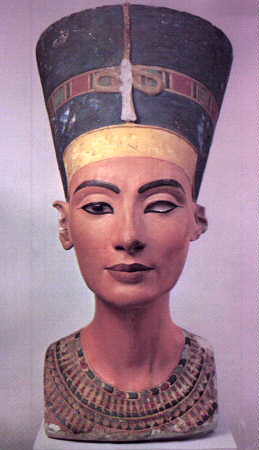 Both wear "headpieces" of a sort, one of feathers and the other a crown, and both wear the common Egyptian collar-jewelry. Redstar 02:39, 16 March 2009 (UTC)

Shouldn't we include about the World Championship's Weavile Dibstuctions?--The Bulb's Master 02:11, 10 August 2009 (UTC) Master of Bulbasaur and Turtwig♀

Looking at Weavile's ear feathers, is it safe to put in the trivia section that Pokken's Weavile is likely male?

Since the only difference between male and female is length of the ear feathers, the same rule applies as the anime: it can only be confirmed by a move that has an effect that varies based on gender (like Attract). I'd say if it is referred to as male or female, but I have no experience in the game (and highly doubt that gender has much significance, if any, in the game). ChE clarinetist (talk) 15:42, 23 November 2015 (UTC)