This episode has references to another anime Mazinger Z

Mazinger Z is a very popular anime in Japan, and this episode has some references to it

The professor robot looks very similar to one of the robots appeared in the show (Abdora U6): 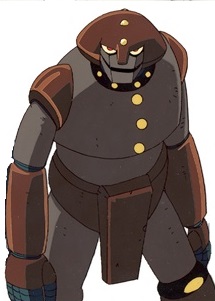 and the red wings are similar to Mazinger Z's Jet Scrander and also use similar effects and movement. Here's a video: https://youtu.be/CORicxRBiws?t=1m13s