Most of things here aren't even supposed to be Pokemon. Come on, adding here every single statue? For instance, those Dragon-like statue merely represent Dragon-types. They aren't supposed to be a depiction of any specific living Pokemon. --Maxim 11:14, 31 July 2011 (UTC)

I agree with this, the statues are just abstract representations, not claiming to be anything else and not disputed by anyone.SuiScorpio 02:50, 3 August 2011 (UTC)

Furthermore, I'd also remove the fairy (it's humanoid, how could this be a Pokemon? Also, it's from a fairy tale, it's not even a real thing. Its similarity to Beautifly is nothing but opinionated fanwank) and the sun (it's not even supposed to be the living thing. It's just... a sun, just artistically represented. The simialrity to Solrock is superficial and based on colors only. When you look closer, you'll see that it's flowery in design). I think that Vuvuzela is really trying too hard on some things (no offense, of course). --Maxim 15:55, 4 August 2011 (UTC)

I agree that the relation to Solrock and Beautifly are unsubstantiated and irrelevant, there's no way Nintendo would be using M03 as a place to debut 'prototype' third generation Pokemon. However they are justified in a section entitled 'Disputed Pokemon' as they were featured in a book of Legendary Pokemon within the movie. Also humanoid is no proof - See: Jynx, Hitmonchan, Mr. Mime, to name a few. SuiScorpio 05:19, 9 August 2011 (UTC)

As good as Gary Glitter

The bear has a much stronger resemblace to Honoguma than Teddiursa, hence why the picture is there, for comparision. XVuvuzela2010X 12:14, 4 August 2011 (UTC)

The bear does not have a much stronger resemblace to Honoguma than Teddiursa. It seems obvious that Teddiursa and the artifact are vastly similar, ears, colour, face etc, while Honoguma has none of these similarities, only 'bear' in its name. Plus as I said before it is just speculation that there is any prototypical link, because early prototypes and final prototypes would never get released at the same time. SuiScorpio 05:13, 9 August 2011 (UTC) ) is a pokémon caught in the Pocket Monster manga, see info here: http://dogasu.bulbagarden.net/manga/pocket_monsters/characters_pokemon.html It should be added. --SamuStar 12:36, 4 August 2011 (UTC)

Hmm, I'm not sure if it belongs here, since there is no disputing that is is a Pokemon, just a manga-exclusive one. I will add it for now, but I really think this deserves its own page. XVuvuzela2010X 13:26, 4 August 2011 (UTC) Can someone with knowledge of Japanese confirm that these are supposed to be Pokemon, and not toys or something... XVuvuzela2010X 14:16, 4 August 2011 (UTC)

The first are mentioned by Bill to be nothing but toys (although he was trying to breed artificial Pokemon that look like this), the second picture are Blue's toys (among them is one of Anakubo's cats - Chinmi. Chinmi and Aiya make cameo appearances in the comics pretty often). The third picture is Brock's collection (yeah, some living Pokemon finally). --Maxim 15:59, 4 August 2011 (UTC)

Entei, Suicune, and Raikou were created from three Pokémon that died when the tower in Ecruteak burned down. It's never explicitly stated what Pokémon died, so I think we could add them to the page. JesusofSuburbia 23:03, 24 November 2011 (UTC)

I've searched around the internet a couple times, and there is absolutely no information whatsoever on this strange statue in Brock's Gym, featured only in Pokemon Origins. The design is very simple - a cat-like creature with wings. Should it be added to this page?

You can spot it behind the Charmander - 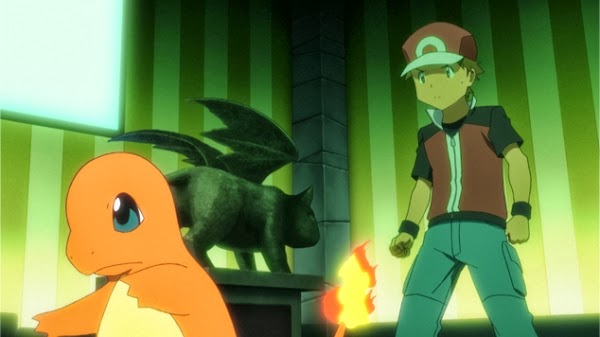 Here and here. I'm not sure these count- the former might be Pokemon that're just hard to recognise in that manga's style, and the latter might just be generic non-Pokemon butterflies. What do you guys think? Yamiidenryuu (talk) 03:33, 24 July 2014 (UTC)

A code in Mcworld can unlock a Pikachu Hat and some five disputed pokemon hats rather why wasn't the hats as a Snivy, Tepig, Oshawott, Minccino, and Basculin? Also, can I add this to the page?http://digiponythedigimon.deviantart.com/art/Possibly-Disputed-Pokemons-or-Fakemons-498580969ThePokeDigiFan (talk) 23:04, 6 December 2014 (UTC)

The statue from Pokémon Origins looks like a creature from the Mother series. This may be off, but the "Unknown Monster" from the third movie draws similarities to Unown. Could someone give me confirmation or denouncement before I add these tidbits? Jdrawer (talk) 05:34, 12 February 2015 (UTC)

In the anime (I believe it's a movie), we see this, which appears to be a Pokémon, though heavily undetailed. Attached is an artist's rendition. Also, in games, we see a similar situation in the paintings in many games. This one also has an artist's depiction. In the former, no word is given on whether what we see is actually a Pokémon, but the paintings oftentimes have titles that state the subject to be a Pokémon. Could/should these be added? Jdrawer (talk) 00:40, 12 March 2015 (UTC)

The Swirlix look-alike is just a random amorphous blob because it appears in a far away shot. It doesn't mean anything. The second is just that, a painting. Could just be weird Bellsprout. Ataro (talk) 01:01, 12 March 2015 (UTC)

I think that first one might be from the first XY episode- I remember a screenshot from the previews being thrown around with a while llama-shaped creature in it. If that's it it's probably a Furfrou. Yamiidenryuu (talk) 22:16, 13 March 2015 (UTC)

Should the nameless Pokémon from the Pokémon Generations episode The Reawakening be included? Zakor1138 (talk) 01:03, 12 October 2016 (UTC)

In SM069, Sophocles retells his favorite legend which includes a "Princess Kaguya" who is represented by what looks like a "baby" version of Celesteela. It resembles a bamboo shoot and a swaddled infant. PDL (talk) 23:19, 19 April 2018 (UTC)

That's the image - not sure if perfect quality, I didn't see this episode yet. I'll add it to the list, with other mentioned creatures, but can't upload files so somebody else should do that. - Mechaniac (talk)

Move to Disputed and unidentified Pokémon

It is not disputed as to whether the original Genesect or the Original Dragon were Pokemon. They are just unidentified. ~Enervation 15:57, 30 June 2020 (UTC)