Maybe it's the same kind of phenomenon that took place between DP102 and DP103. There should have been absolutely no way the gang could have gotten three-quarters of the way across the country, especially one Sinnoh's size, between episodes without explaination.

This came from the same magazine scans that confirmed everything else known about the episode so far. --The Great Butler 03:33, 18 July 2009 (UTC) 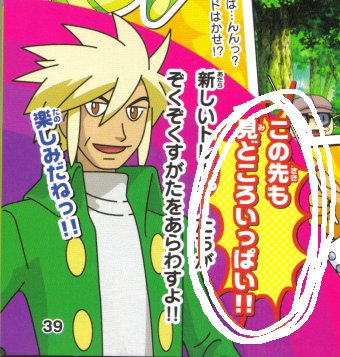 The mistake I put for Dawn's ribbons being smaller than usual has been removed. Below are pictures of Dawn's ribbons both before and during this episode. Does anyone else agree that the ribbons from this episde are way smaller than normal, and am I ok to restore the goof and pic? Watchermark 13:50, 15 August 2009 (UTC) If that's a mistake then her Ribbon Box has also become much larger than the previous one. I think the ribbon box and ribbons are changed due to HD version. I am not sure. --♫♪Adyniz♪♫ 14:34, 15 August 2009 (UTC)

Does it seem to anybody else that little ash's voice is like his 4 kids voice? The voice from hoenn?~Vegeta

No, it just Sarah have become familiar to the dub voice and now she have experience of dubbing ash's voice perfectly. --♫♪Adyniz♪♫ 05:36, 17 January 2010 (UTC)